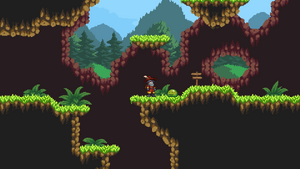 The Mountain Path is the first area that can be explored. It consists of mostly grassy areas, and also is home to the Keeper's Trail. The Keeper's Trail is denoted by the obelisks that depict a poem as it is traversed. It is connected to the Keeper's Stronghold to the east, the Blue Caves to the south, and Snowy Peaks to the west.

The player begins their Keeper Journey here, in the Mountain Path on the Keeper's Trail. Your Spectral Familiar explains that you must tame other Monsters in order to survive in the Monster Sanctuary.

You progress onward and capture yourself a Blob - your very first friend - by hatching it from an egg.

After traveling through the Keeper's Trail, you eventually find your way to Old Buran. He lives out here to help new Keepers in their travels. To make sure you're good enough to visit the Keeper's Stronghold, he challenges you to defeat some Blobs he's trained. Note that this battle is not a Keeper Duel but instead a regular wild battle. After this, he teaches you about Champion Monsters and forces you to fight your very first one - the Steam Golem.

Once you defeat the Steam Golem, you earn a new rank - Keeper Aspirant and are told to head off to the Keeper's Stronghold, next. He also tells you that these mysterious "Champion Monsters" have been becoming more prevalent in the Monster Sanctuary lately, but no one is quite sure of the cause.

Before you leave, Old Buran tells you of another Champion residing in the Mountain Path and gives you a Mountain Path Key required to face off against a Monk Champion.

The Treasure Hunter can be found near the Teleporter Crystal. On initially talking to him, he'll explain how Teleporter Crystals work. He also has a dialogue option for additional info on where Old Buran is. He also sells some items.

You first encounter Old Buran at the far west side of the Mountain Path at his Blob Ranch. He helps the player by training them battling against Blobs and after that, the Steam Golem.

The player will later encounters him again at the entrance of Snowy Peaks.

After stumbling upon the Blob Statues in Magma Chamber, your Spectral Familiar suggests that Old Buran might know the secrets behind these statues. Initially, Old Buran would deny this but then says that it is a family secret. However he will reveal the truth if the player win against his Blob team in a Keeper Duel.

Once the player defeats Old Buran, he congratulates you and tries to explain about the statues but instead, hands a Blob Key, which is used to unlock the three Blob Locks scattered throughout the Sanctuary.

Young Keeper,
'tis the Keepers' Trail's beginning,
for all of man, beast and Sanctuary
has beginning.

Man prospered through generations,
Founded cities and nations,
Connected by dirt and wheel
And later by steam and steel.

Man knew of those who wait
In the woods and caverns beyond,
Yet for the treasures within he longed,
For the greed of kings was great.

Man plunged into deepest abyss,
Foraged, attacked, and slew.
These endeavors were without solace,
The cost on humanity nobody knew.

But then came the four,
Free from greed or any other sin,
Who listened to the voice within,
Struck a wound to the realm's core.

From this wound, rivers flowed
And mountains grew mighty and cold.
'Tis the only place for any creature
That lives in peace with its nature.

Click here to view the treasures in this area!

Retrieved from "https://monster-sanctuary.fandom.com/wiki/Mountain_Path?oldid=18959"
Community content is available under CC-BY-SA unless otherwise noted.